Skip to main content
The Route 108 Bridge between Newmarket and Newfields will be closed throughout the night December 4th & 5th between 7:00PM... Read more »

Newmarket’s Police Department has employed a police department since the late 1800s. In the early years, Newmarket was a thriving manufacturing town and employed a part-time force to police the community. One of the original officers was John Andrew Gordon who was appointed as a part-time officer at the age of 25 in 1894. Officer Gordon remained on the force and was appointed part-time Chief of Police in 1927. Gordon became the Departments's first full-time member and its first full-time Police Chief in 1937, a post he held until his retirement at the age of 87 in 1956. His service to the community is unsurpassed! He was a police officer for 60 years and the department's chief for 29 years!

The department’s first police cruiser arrived in the 1940s. The police station was located in the basement of the old Town Hall, which was located on Main Street across from the present location of the Post Office. The Newmarket Municipal Court was held in a backroom behind the police department for many years until its last presiding justice H. Russell McGuirk retired in the late 1980s. The Municipal Court was dissolved at the direction of the State Legislature and Newmarket was incorporated into the jurisdiction of the Exeter District Court. 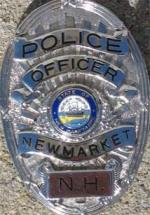